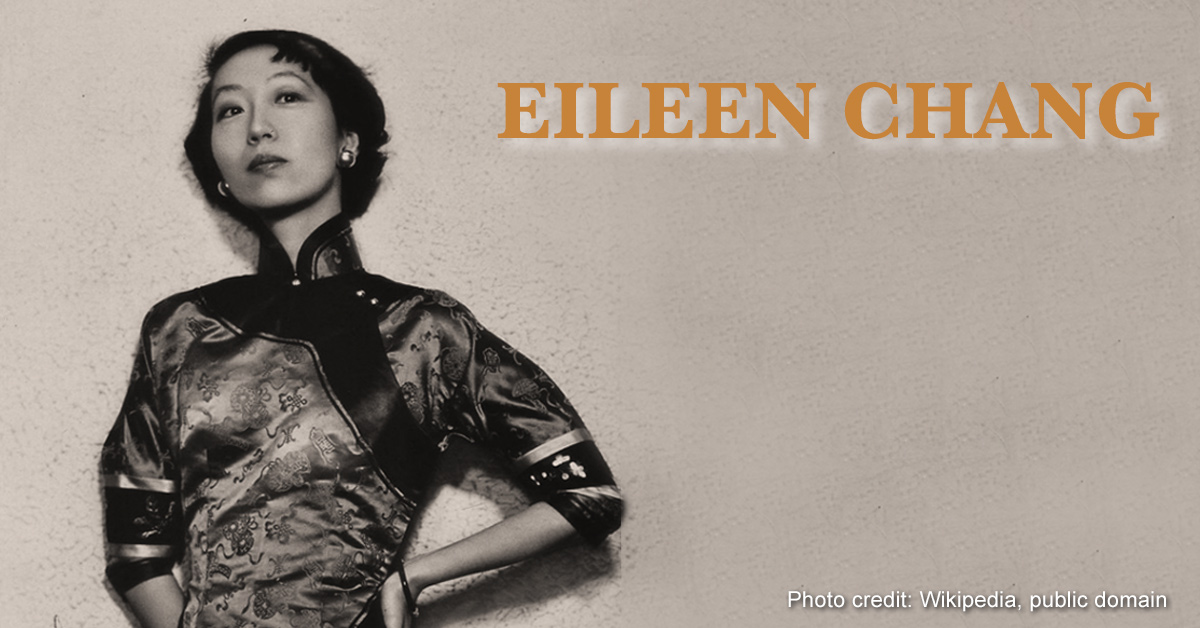 Eileen Chang is, for me, a problematic writer. She is a very good writer, and I want to like her writing more than I do. The reasons are complicated. But first, let’s establish some facts on the ground. Chang was born in Shanghai, 1920, and raised bilingually, Chinese and English. Her family, although of an aristocratic lineage, was a deeply troubled one, a dysfunctional dynamic that shows up in her writing again and again. She ultimately fled China after the communist take-over and settled in the US, where she remained until her death in 1995. (Most of this history comes from Wikipedia.) Chang was and remains a celebrated writer, especially in China, Hong Kong, and Taiwan. She very much belongs on PowellsBooks Blog, “25 Books to Read Before You Die, World Edition, 2016.”

The works she is most remembered for were written when she was in her 20s, and it is from that period of her life that the four novellas and two short stories have been chosen that comprise the collection, Love in a Fallen City, translated by Karen S. Kingsbury (with the exception of one story, translated by Chang herself).

I’d like to focus on the title novella, “Love in a Fallen City,” which I think is the best piece in the book. Bai Liusu is “Sixth Sister” in the Bai household. She is a young, childless widow in her late 20s, come home some years ago after her divorce from an abusive husband and reluctantly accepted back in the family. As the story opens, the Bais get word that Liusu’s former husband has died. Liusu doesn’t fit in her nuclear family—is in fact actively resented and ridiculed by them—and is being pushed to go back to her former husband’s family, who will also reluctantly take her in and which she refuses to do. Soon after this, quite by accident, she begins a very long and shifting relationship with a Mr. Fan, who is wealthy, sophisticated, and difficult to pin down. Their on-again, off-again friendship/romance, which constantly evolves, matures, comes undone and is restarted, will carry the story through to its conclusion many years later, through the bombing of Hong Kong by the Japanese, the horrors of the war, and into our modern age. It is a compelling story, beautifully modulated through the eyes and heart of Liusu, a complex and remarkably resilient character.

And so, what is good, what is problematic with Chang’s writing?

Chang has a real command of story—of drama and conflict. Her stories move, they cover ground and roll through years and decades. She traffics mostly in domestic situations, family dynamics, marriage, friends. Given the politically charged milieu within she lived and wrote, one can understand her avoidance of political themes. Her portrayal of her characters is brutally frank, candid and unflinching and frequently sad and despairing. A good example is Ch’i-ch’iao in the novella “The Golden Cangue,” who over the course of a long life tyrannizes her children, ruining—not to say, poisoning—their lives. Ch’i-ch’iao’s depiction is unapologetic; it is, in all ways, an agonized and scathing portrait of a domineering, manipulative, and frightened and frightening woman.

Chang’s prose frequently possesses a stunning beauty. She’s lyrical—poetic and metaphoric. And that’s obviously good, too. But sometimes these intensely lyrical passages come across as affected over-writing, a writer working too hard to be exceptional, and seem out of place and at odds with the pulse of the story. And it can be jarring. When dramatic things are occurring, the introduction of an extended lyrical description of a scene from nature seems like an intrusion. It retards the action and draws our attention away from the characters to the writer.

For this kind of hyper-poeticism to work, especially with interruptive passages of intense description, one of two things generally needs to happen. Either the characters are such that they are alive to the beauty around them and can report it to us through their eyes and sensibilities—what writers call the Uncle Charles Principle, from Joyce—or the writer steps out from the page, befriends us, and paints the pictures his or her characters wouldn’t see in a million years. Such an omniscient narrator is more old-fashioned, the traditional story-telling voice, and that’s the tack that Chang usually takes. One gets the feeling from time to time that her characters are just standing around waiting for her to finish coloring in a particularly beautiful scene for us.

Also somewhat surprisingly, Chang seldom provides explanation for her characters’ actions; they simply do what they do and the story absorbs those actions. And that’s good, too, keeps a reader on his toes—except when those actions seem arbitrary and out of character. One of the chief pleasures of reading fiction is watching things unreel with a sense of inevitability, and that comes from solid characters solidly fixed. And when someone in a story up and does something totally unexpected, the effect can be disconcerting and jarring. At such flare-ups, we would benefit from some authorial intervention and guidance. I found myself several times simply thrown out of a story because of some inexplicable character reversal.

Chang’s youth when she composed these particular works may explain and excuse the overwriting and the uneven character portrayals, but this period of her life is generally considered her prime. This is the best we get, and it is—on the whole, quite honestly—very good