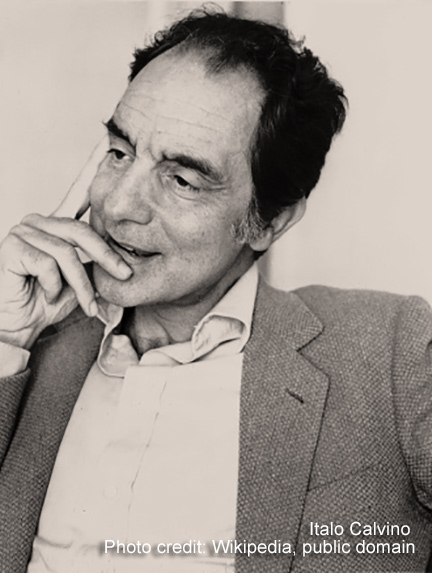 “It is not the voice that commands the story; it is the ear.”

One thing that helped me decide when I contemplated doing a series of blog posts based on PowellsBooks Blog, “25 Books to Read Before You Die, World Edition, 2016,” was seeing on the list a book by Italo Calvino. I had previously read two of Calvino’s works—the double novellas, The Nonexistent Knight and The Cloven Viscount, and The Complete Cosmocomics—and liked them very much, was delighted by them, in fact, even if I didn’t always know where Calvino was going.

Italo Calvino (1923-1985), born in Cuba of Italian parents and raised from an early age in Italy, was by turns an avid anti-fascist in WW II, then a dedicated communist before becoming disillusioned with communism in the mid-1950s, and pretty much after that apolitical. Early in his career he was a writer of realism, but became disenchanted, as well, with realism and gradually morphed into a fantasist, or—his usual designation—a fabulist.

But to say the mature Calvino fits into this or that category misses the point of the writer entirely. Into what box, for instance, would you place someone who writes thus:

The ancients built Valdrada on the shores of a lake, with houses all verandas one above the other, and high streets whose railed parapets look out over the water. Thus the traveler, arriving, sees two cities: one erect above the lake, and the other reflected, upside down. Nothing exists or happens in the one Valdrada that the other Valdrada does not repeat, because the city was so constructed that its every point would be reflected in its mirror, and the Valdrada down in the water contains not only all the flutings and juttings of the façades that rise above the lake, but also the rooms’ interiors with ceilings and floors, the perspective of the halls, the mirrors of the wardrobes. Valdrada’s inhabitants know that each of their actions is, at once, that action and its mirror-image, which possesses the special dignity of images, and this awareness prevents them from succumbing for a single moment to chance and forgetfulness. Even when lovers twist their naked bodies, skin again skin, seeking the position that will give one the most pleasure in the other, even when murderers plunge the knife into the black veins of the neck and more clotted blood pours out the more they press the blade that slips between the tendons, it is not so much their copulating or murdering that matters as the copulating or murdering of the images, limpid and cold in the mirror.

Calvino, simply put, creates his own category, or, as it were in this case, his own city. Invisible Cities, translated by William Weaver (A Helen and Kurt Wolff Book, Harcourt Brace Jovanovich, 1974), features only two characters, Marco Polo and the great emperor, Kublai Khan. Ostensibly, it is a story of Marco Polo’s successive, short narratives relating his visits to the remote and marvelous cities throughout Khan’s empire that the emperor has never seen, all named for women. Ostensibly, I say. What the book really constitutes is a series of wildly imaginative and brilliant riffs on this dream world we find ourselves in every astonishing moment of our lives. By turns, Polo’s riffs on Khan’s remarkable cities are enigmatic, epigrammatic, poetic, evocative, funny, and even, at times, philosophic, questioning and probing a shapeshifting reality. Can there really be such marvelous cities? the Great Kahn wonders. How can there not? Polo responds.

Never in all my travels had I ventured as far as Adelma. It was dusk when I landed there. On the dock the sailor who caught the rope and tied it to the bollard resembled a man who had soldiered with me and was dead. It was the hour of the wholesale fish market. An old man was loading a basket of sea urchins on a cart; I thought I recognized him; when I turned, he had disappeared down an alley, but I realized that he looked like a fisherman who, already old when I was a child, could no longer be among the living. I was upset by the sight of a fever victim huddled on the ground, a blanket over his head: my father a few days before his death had yellow eyes and a growth of beard like this man. I turned my gaze aside; I no longer dared look anyone in the face. I thought: “If Adelma is a city I am seeing in a dream, where you encounter only the dead, the dream frightens me. If Adelma is a real city, inhabited by living people, I need only continue looking at them and the resemblances will dissolve, alien faces will appear, bearing anguish. In either case, it is best for me not to insist on staring at them.” A vegetable vendor was weighing a cabbage on a scales and put it in a basket dangling on a string a girl lowered from a balcony. The girl was identical with one in my village who had gone mad for love and killed herself. The vegetable vendor raised her face: she was my grandmother.

My library copy came complete with a very fussy, complex business card from an Orientation and Mobility Specialist, which I employed as a bookmark, something I think that would amuse Calvino. Because of the richness and nonstop fabulous flow of the prose, I found the book was best taken in small gulps. For a small book one might easily read in an afternoon or evening or two, I spent weeks savoring the one- or two-page chapters, then left the complex business card in the volume for the next enchanted library patron.