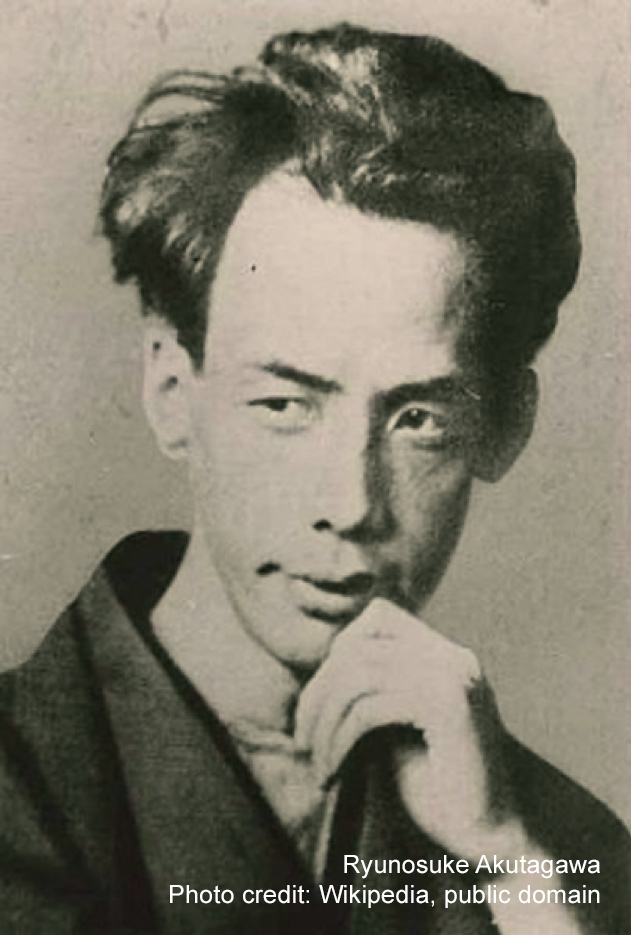 Ryunosuke Akutagawa, one of Japan’s most celebrated writers, cut his life short at age 35, by suicide (1892-1927). During his short career of 12-15 years Akutagawa (pronounced Dyu-noss-ke Ak-ta-ga-wa) produced stories that continue to be read seriously both in Japan and in the West. For us, his most famous story is probably “Rashomon,” which is the title of the collection that appears on PowellsBooks Blog, “25 Books to Read Before You Die, World Edition, 2016.” We also know that title from Akira Kurosawa’s 1950 film, Rashomon, although, ironically, Kurosawa obtained most of his film content from a second Akutagawa story, “In a Bamboo Grove.”

Published in 2006 by Penguin Books, the story collection Rashomon and Seventeen Other Stories (translated by Jay Rubin, who has provided extensive notes from which I am taking most of my comments here, and also containing a deeply personal introduction by Haruki Murakami) is divided into four sections that represent significant periods in Akutagawa’s abbreviated career: “A World in Decay”; “Under the Sword”; “Modern Tragicomedy”; and “Akutagawa’s Own Story.”

In his earliest pieces (“A World in Decay,” which includes the stories “Rashomon” and “In a Bamboo Grove”), Akutagawa adopted traditional stories from Japan’s classical Heian Period (794-1185) and recast them in a modern sensibility. These stories are very stark, almost naked in their lack of sentimentality; they often present a form of unapologetically drawn brutality that challenges our own (jaded) sensibilities. One is reminded of Dostoevsky, whom Akutagawa greatly admired, particularly Raskolnikov’s cold-blooded murder of the old woman pawnbroker in Crime and Punishment—except Akutagawa seldom provides any final saving redemption.

Probably the most fully realized of these early stories is “Hell Screen.” And again, at least at first, the story calls to mind another Western piece, Verdi’s opera Rigoletto, the immoral (or amoral) father who inadvertently and tragically brings about the death of his beloved daughter—except in Akutagawa the ending takes an incredible twist. The great Lord Horikawa, in response to the artist Yoshihide’s craven request to witness the death of woman in a burning carriage so that he may paint the scene on the screen of hell that the lord has demanded of him, secretly orders Yoshihide’s daughter to be the woman in the burning carriage. Yoshihide, consumed by anguish as he realizes it is own daughter in the burning carriage, is transformed into a sort of monster by the scene of the young girl dying horrifically before his eyes (and described by Akutagawa in gruesome graphic detail). Inexplicably, Yoshihide suddenly experiences the exact opposite of anguish: It is indeed hell he is witnessing and it brings him to an even more horrific ecstasy. He finishes the screen of hell for the lord and kills himself a few days later, but that does not lessen the impact of the story. I know nothing in Western literature to match such a savage and unflinching depiction of pure evil.

I am going to pass over the sections “Under the Sword” and “Modern Tragicomedy,” which have some wonderful stories, a few wildly funny, to say a word about the final section, “Akutagawa’s Own Story.” By the end of his life, Akutagawa’s career had begun to go into eclipse. The end of the 19th Century and beginning of the 20th, World War I, and the rapid modulations in culture in the 1920s—all brought about vast changes in the Japanese reading public’s tastes and desires. Akutagawa knew he needed to change with the times, but found it difficult. He was a classical writer who wrote in coldly impersonal tones, and what the public now wanted were first-person, confessional stories of real, contemporary life. Meanwhile, along with his deteriorating health, his personal life—marriage and fatherhood—increasingly brought him less comfort and tranquility.

To stay in the public eye, he began writing stories in contemporary settings and then personal stories of his life. These latter stories are maybe even bleaker than his early stories. The book concludes with “Spinning Gears,” a painstakingly detailed account of a few agonizing days in his life as he traveled away from home. The first-person narrator is neurasthenic, paranoid, beset with nervous tics and disorders. He enters a café, orders a coffee, and immediately begins experiencing paranoid fears and has to flee. He goes back to his hotel but cannot abide his room. He wanders the streets restlessly and has disturbing encounters with people he accosts. The world—as he himself—has become a phantasmagoric nightmare. The story finally breaks off without a resolution, but with an attached note: “—I don’t have the strength to keep writing this. To go on living with this feeling is painful beyond description. Isn’t there someone kind enough to strangle me in my sleep?”

Akutagawa killed himself soon after; the story was published posthumously.