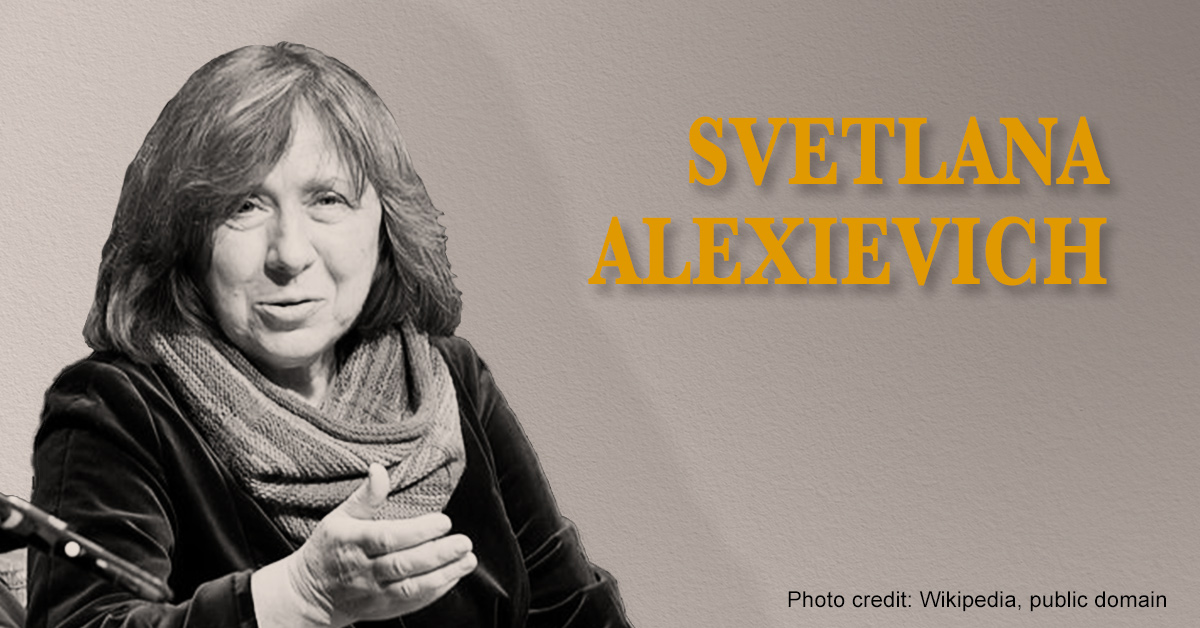 As I have been reading my way through Powell’s Bookstore “25 Books to Read Before You Die, World Edition, 2016,” I have been choosing my selections from the list somewhat randomly. For some time I’ve had my eye on Svetlana Alexievich’s Voices from Chernobyl and finally last month got around to ordering it from the library. And now, only weeks later, we and the rest of the world are living in isolation, fearful of the covid-19 virus pandemic and worried that our government—and pretty much every government—has not been candid with us.

Does history repeat itself?

The Soviets did everything possible to minimize and sweep under the rug what happened at Chernobyl, costing people their lives and livelihoods and subjecting them to dire and often hideous fates. Here is a quote from today’s (03.20.2020) Washington Post: “As my colleague Philip Bump wrote, ‘Republicans and Fox News viewers are both about as likely to say that the media broadly has either slightly or greatly exaggerated the threat posed by the virus,’ according to new data from the Pew Research Center.”

But more on demoralizing historical parallels later. Let’s talk about the book first. 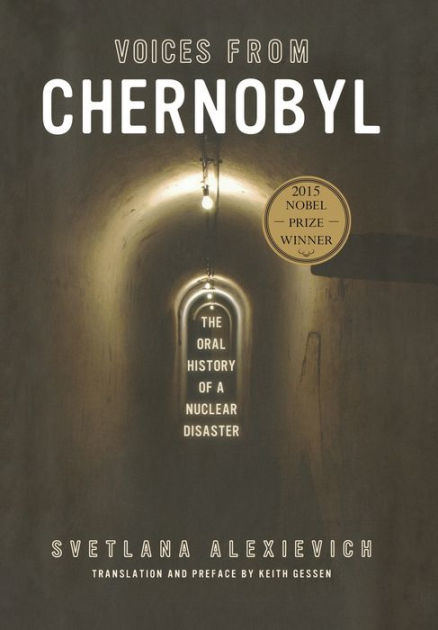 During a routine safety test that went horribly wrong, the No. 4 nuclear reactor at the Chernobyl Nuclear Power Plant succumbed on Saturday, April 26, 1986, to an uncontrolled nuclear reaction. The plant is located near the city of Pripyat in northern Ukraine, on the border of Belarus and Russia (Ukraine was at that time still a part of the Soviet Union). In the ensuing emergency, firemen and other first responders were sent to the site and, without any protective safety apparel, masks or instruction, were told to climb the burning building to try—hopelessly, as it was—to extinguish a fire on the roof the reactor. Those men were subject to immense and, in most cases, fatal amounts of radiation. Pripyat and all neighboring villages were evacuated, but in such a haphazard and inept manner that thousands of residents were also subject to crippling radiation poisoning.

The design of Chernobyl was faulty, its construction was shoddy and corrupt, and its operating personnel were not properly trained and equipped. When the worst happened, no one knew what to do, other than deny. The incident was—operationally, morally, politically—a colossal failure, an unnecessary tragedy that has ramified down through the lives and children of those who were its victims. More than 485 villages were abandoned and some two million people still live on contaminated land. The remains of No. 4 reactor have been entombed in an enormous cement sarcophagus and are still being remediated, work not scheduled for completion until 2065. One only hopes they at least possessed enough knowhow to mix cement well enough to last forty-five more years. (Primary source for this summary: Wikipedia.)

Svetlana Alexievich was born (1948) in the Ukraine, grew up in Belarus. She writes in Russian. Known as an investigative journalist (a label she rejects), essayist, and, especially, oral historian. She did not invent the form of oral history, but has come to be considered the premiere practitioner of the form. In 2015 Alexievich became the first Belarusian and first journalist to win the Nobel Prize. Perhaps more highly regarded outside Belarus than within it, she is widely honored for her work—work for this book, in particular, according to its dust jacket, that resulted in her acquiring an immune deficiency

Voices from Chernobyl (first edition, Editions Ostojie, 1997; this edition, Dalkey Archive Press, translated by Keith Gessen, 2005) is comprised entirely of personal stories that Alexievich has collected from the “Zone.” She calls the stories monologues, although she is clearly a presence during the recordings since the narrators will address her directly. More than one of her narrators, in fact, prove to be hostile, attacking her personally and condemning her project that threatens to criticize the government and its authorities. The monologue are not, I believe, to be taken as one hundred percent literal transcriptions of people’s stories. Because of the infrequency of broken and fragmentary thoughts—the way in daily life our own conversations have a tendency to get ahead of themselves, become repetitious, and require on-going self-editing and amending—these monologues seem to me to have been at least superficially edited and are, thus, curated stories that have been consciously selected and arranged. Some narrators are identified by name, others are anonymous or identified only by job title.

The book is divided into three sections:

The narrators constitute a comprehensive survey of those involved in and influenced by the accident: the first firefighters who responded and who died or watched their comrades die; the wives who nursed their husbands in their death throes; men who worked at the plant; local officials who are contrite but argue they thought they were doing the right thing by following their orders to minimize, excuse, and delay from taking any drastic action; communist party officials who are defensive and self-exculpating; villagers who didn’t understand and still don’t understand why they can’t plant and harvest their crops when the land is still manifestly fertile and harvests are robust; women who do not dare to have children; and the engineers and specialists who tried and failed to warn people.

Not all the monologues are grisly, although the book is framed by the two most powerful accounts, both of young wives who endured watching pretty much helplessly their young spouses die gruesome, agonizing deaths. These two framing monologues are almost unbearable in their gripping pathos. After reading the first one, my reaction was that, if the whole book was going to be composed of such harrowing accounts, I probably wouldn’t be able to read it.

Here is a quote from one of scientists, Vasily Borisovich Nesterenko:

I’m calling over a government line, but they’re already blocking things. As soon as you start talking about the accident, the line goes dead. So they’re listening, obviously! I hope it’s clear who’s listening—the appropriate agency. The government within the government. And this is despite the fact that I’m calling the First Secretary of the Central Committee. And me? I’m the director of the Institute for Nuclear Energy at the Belarussian Academy of Science. Professor, member-correspondent of the Academy. But even I was blocked.

It took me about two hours to finally reach Slyunkov. I tell him: “It’s a serious accident. According to my calculations”—and I’d had a chance by then to talk with some people in Moscow and figure some things out—“the radioactive cloud is moving toward us, towards Belarus. We need to immediately perform an iodine prophylaxis of the population and evacuate everyone near the station. No man or animal should be within a hundred kilometers of the place.”

“I’ve already received reports,” says Slyunkov. “There was a fire, but they’ve put it out.”

I can’t hold it in. “That’s a lie! A blatant lie! Any physicist will tell you that graphite burns at something like five tons per hour. Think of how long it’s going to burn!”

I get on the first train to Minsk. I don’t sleep the whole night there. In the morning I’m home. I measure my son’s thyroid—that was the ideal dosimeter then—it’s at 180 micro-roentgen per hour. He needed potassium iodine. This was ordinary iodine. A child needed two to three drops in half a glass of solvent, an adult needed three to four. The reactor burned for ten days, and this should have been done for ten days. But no one listened to us! No one listened to the scientists and the doctors. They pulled science and medicine into politics. Of course they did!

So, we come back to that central question with which all good and wise counsel eternally presents us: What do me make of this book? What do we draw from it? What do we find resonant with our lives? Well, one might pass it off by saying, “Fukushima 2011 taught us that we learned nothing from Chernobyl.” And neither did Three-Mile Island 1979 teach the Soviets anything. And all that is hard to refute. Similarly, the way the Trump administration has tried to gloss over the coronavirus crisis, brush it aside, label it a hoax, call it a “Chinese Virus” (I suppose what’s next is for them to begin calling it a “Democratic Joe Biden virus”), and, in the meantime, squander precious time that will cost thousands of additional lives also makes it seem that we learn nothing ever, ever—except that money and power and politics come before human lives, that we are a species in an unstoppable march toward oblivion.

And so we may well be. After they clumsily evacuated the villagers from the farms that had been theirs for generations, they had to go back in and shoot the livestock and pets. And then the shooters fell ill to radiation poisoning, too.

Books like Alexievich’s can help us remember and learn, but only if we listen.