Powell’s 25 Books to Read Before You Die

Image by kerttu from Pixabay 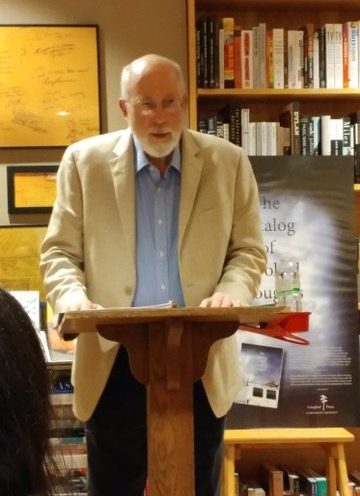 Because that is precisely what all serious art aspires to. If a work of art does not confound you, baffle, confront, challenge, or provoke you, then it is not art, but entertainment. And don’t get me wrong: nothing against entertainment. If you wish to be confirmed, coddled, stroked and comforted and left at the conclusion of the experience no different an individual than you were going in—then, by all means, read that detective novel, watch that football game, cheer for Spiderman or bob for apples. But entertainment never built a city—or leveled a city, for that matter—never transformed a single individual, never took an axe to the frozen sea within us. A person once remarked of one of my characters that the character so provoked her that she wanted to seize hold of her shoulders and shake her. That may well have been the highest compliment my writing has ever received. If you are so aroused by a character, so pissed with her, that you want to shake her, you can be assured of one thing: That character has reached inside you and shaken you. Heavens, none of this is news: Aristotle clarified it for us two millennia ago, and in our era Franz Kafka stated it far more eloquently than I. Catharsis, it’s called. What we are going to do here then is examine some recent world literature. Think of Lord of Misrule, Blog Series I, Reading Across the Lines, as a meander through Powell’s Books List of 25 World Books to Read Before You Die, World Edition. Each short post takes up one of Powell’s recommendations, describes it, and offers some critical reflection. The ultimate aim is to encourage US readers to explore a little farther afield. And so, with that, let’s get to it.

As I have been reading my way through Powell’s Bookstore “25 Books to Read Before You Die, World Edition, 2016,” I have been choosing my selections from the list somewhat randomly. For some time I’ve had my eye on Svetlana Alexievich’s Voices from Chernobyl and...

END_OF_DOCUMENT_TOKEN_TO_BE_REPLACED

Bohumil Hrabal: Too Loud a Solitude

Czechoslovakian writer Bohumil Hrabal comes out of a long tradition of wicked satirists. Think of Rabelais, Swift, Voltaire, and, in our era, Günter Grass (The Tin Drum), Raymond Coover (The Public Burning), and Terry Southern (The Magic Christian). Or, even more...

END_OF_DOCUMENT_TOKEN_TO_BE_REPLACED

Eileen Chang is, for me, a problematic writer. She is a very good writer, and I want to like her writing more than I do. The reasons are complicated. But first, let’s establish some facts on the ground. Chang was born in Shanghai, 1920, and raised bilingually, Chinese...

END_OF_DOCUMENT_TOKEN_TO_BE_REPLACED

“It is not the voice that commands the story; it is the ear.”  One thing that helped me decide when I contemplated doing a series of blog posts based on PowellsBooks Blog, “25 Books to Read Before You Die, World Edition, 2016,” was seeing on the list a book by Italo...

END_OF_DOCUMENT_TOKEN_TO_BE_REPLACED

Ryunosuke Akutagawa, one of Japan’s most celebrated writers, cut his life short at age 35, by suicide (1892-1927). During his short career of 12-15 years Akutagawa (pronounced Dyu-noss-ke Ak-ta-ga-wa) produced stories that continue to be read seriously both in Japan...

END_OF_DOCUMENT_TOKEN_TO_BE_REPLACED

Reading Across the Lines

It is 1925 in Ilheus, a sleepy town in the province of Bahia in southern Brazil, and Nacib the Arab’s longstanding cook—for him personally as well as for his café—has up and left him for family matters, as she has threatened to do for years. On this same day that...